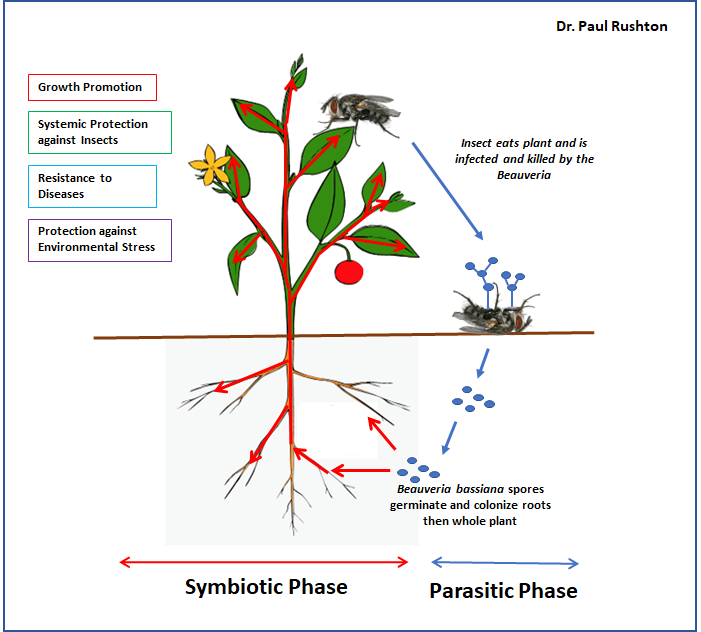 What is Inoculation and why do my plants need it?

I decided to call this blog “The Inoculator Blog” and the accompanying newsletter  “The Inoculator” (which is supposed to look like an old-time newspaper). So, why do I focus on inoculation and what does it mean?

Well, according to the Merriam-Webster online dictionary, the definition of “inoculate” is

“To introduce a microorganism into”

So, why do we want to introduce a microorganism into a plant?

Well, microorganisms can form a symbiotic relationship with plants. These interactions benefit both the plant and the microorganism (a fungus or bacterium). The benefits for the plant can be both wide-ranging and profound. They can include many important traits such as yield, disease resistance, resistance to insects, photosynthetic capacity, and even drought tolerance.

In the plant world, these natural beneficial organisms that form a symbiosis are called Biological Control Agents (BCAs) or simply “Biologicals.”

Inoculation is crucial to a good grow.

Getting a beneficial microorganism into your plants brings many benefits.

It is also safe – no more chemicals.

With the Prime Superior range, inoculation is quick and easy with a product designed to be used however you grow.

Here, I am using Prime Superior Clone on a hemp cutting. Dip in the Inoculation Honey, and the job is done. You don’t have to wear the brightly colored lab coat though…..

The Advantages of Biologicals

Good Biologicals have many advantages over chemicals. The main two are:

Typically, a chemical is either a pesticide or an insecticide or a fertilizer/nutrient. Biologicals can be all three of these and more. So, the potential is huge.

Let’s take a brief look at the history of growing since the Second World War. The Green Revolution, or the Third Agricultural Revolution started in the 1950s. As well as including new mechanization and dwarf varieties of crops, such as rice and wheat, it also included the extensive use of chemical fertilizers, and other agrochemicals. This included the extensive use of fungicides and killed many of the beneficial organisms in the soil. Put simply, living soils became dead soils. The collection of organisms in the soil (the rhizobiome) was greatly reduced and people now realize that this was a very bad thing.

Fortunately, many people now grow using living soils. In many cases this requires adding back some of the microorganisms that should be present in your soil where they would help the plants. The best-known beneficial microorganisms are mycorrhizae, Trichoderma, and Beauveria bassiana and I believe that although all three bring major benefits, that Beauveria bassiana is the most effective of the three.

In another blog post, I will cover the microorganisms that are components of Biologicals and living soils. I will also cover the discovery of Beauveria bassiana by the Italian microbiologist Agostino Bassi, But for today, I will just talk about inoculation with Beauveria bassiana and why is it probably the best Biological.

Beauveria bassiana is a natural component of healthy living soils throughout the world and it was the first Biological to be discovered. It is widely used as a biopesticide, but the most useful part of its lifecycle has only recently been understood – the fungus forms a beneficial symbiosis with most plant species. This is especially useful as the fungus becomes systemic (it is found throughout the entire plant) unlike many other Biologicals that only colonize the plant roots (for example, mycorrhizae and Trichoderma). For this reason, and many others, Beauveria is among the best and arguably THE best Biological.

Prime Superior is the most extensive range of Beauveria bassiana products for home grows of all types, from house plants to gardens to legal cannabis. We designed the range to have a product to inoculate your plants however you grow. Prime Superior contains a proprietary strain of Beauveria that is optimized for plants and that you won’t find anywhere else.

So, to inoculate seeds, you simply roll the seeds in Prime Superior Seed. To inoculate when you make cuttings/clones simply dip the end of the cut in the honey-based Prime Superior Clone. To inoculate house plants or small grows, such as six cannabis plants, simply spray growing plants with Prime Superior Drench. Finally, if you have a larger area such as a lawn or garden, or a larger greenhouse or outdoor grow, then mix up some Prime Superior Concentrate (1 ounce makes 10 gallons of liquid) and spray your plants.

So now you know how Biologicals bring considerably more benefits to your plants than chemicals.

This is why you need to inoculate…….

Please note: Any orders placed today will ship no later than on the next business day. Dismiss